A collection of pet portraits and Edinburgh Closes by pastel artist Carolanne Jardine.  The closes are available as prints, cards, mugs and calendars from the shop page.  Portrait commissions are bespoke and are worked from your photos.  Please get in touch for further details. 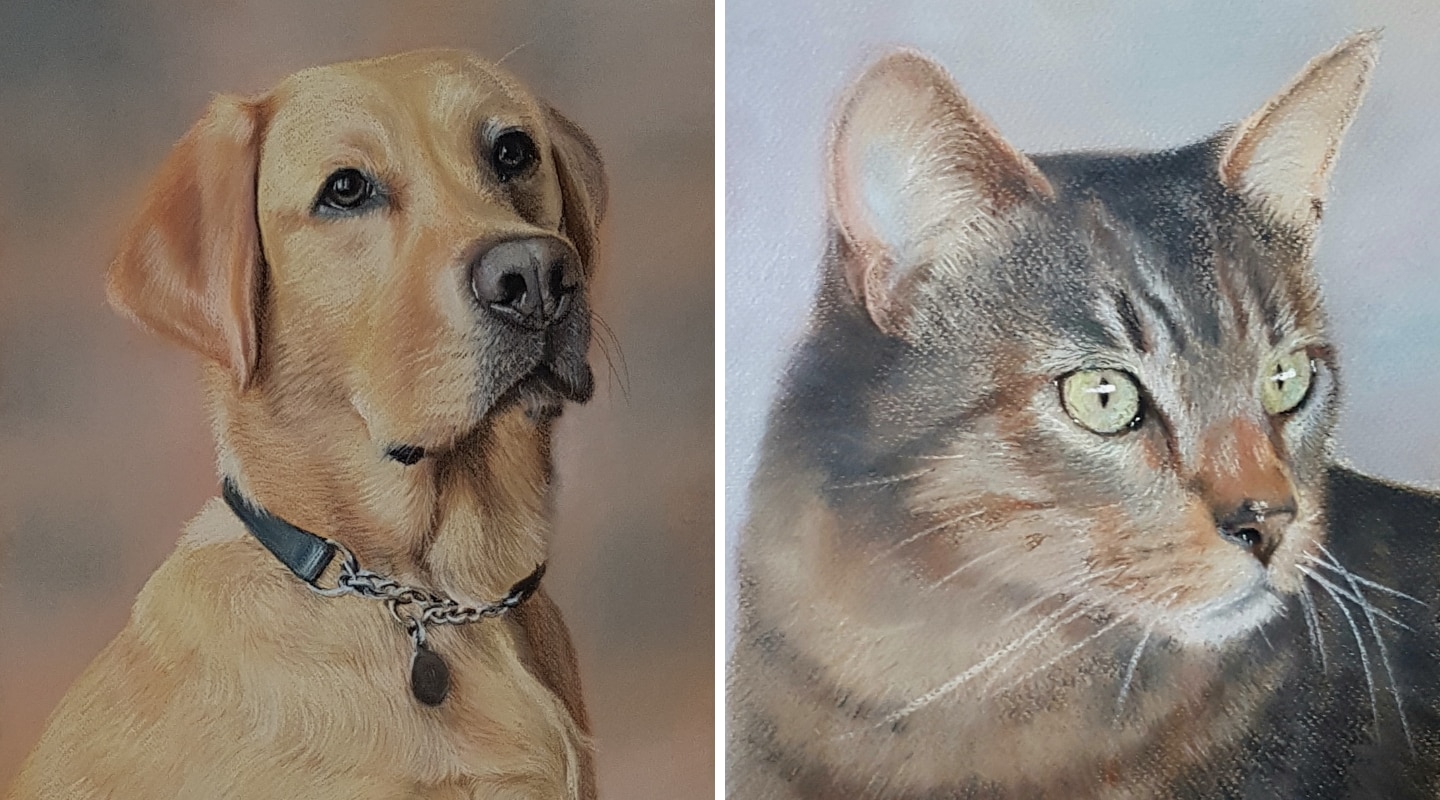 PET PORTRAIT COMMISSIONS - A lovely gift or a personal keepsake. Can all be done via email and post. Distance no object. Sharp, clear photos work best for fine details and markings. Please contact me for more details and to be added to the waiting list. PRICE: £250 plus postage for a single pet portrait (Multiple pet portraits priced on a case-by-case basis)

ADVOCATE'S CLOSE - is steep and narrow and leads from Edinburgh’s Royal Mile down to Cockburn Street via a lot of stairs. This close is believed to date back to 1544 and takes its name from Sir James Stewart of Goodtrees who had his house here. He was the last Lord Advocate of Scotland in office during the time of the restoration, revolution and union.

WHITE HORSE CLOSE - an enclosed courtyard situated off the Canongate on Edinburgh’s historic Royal Mile. In the sixteenth century this was the site of the Royal Mews and was known as Davidson’s Close and then Laurence Ord’s Close before it acquired its current name which came about when Ord rebuilt the existing tenement and erected an Inn which he named in honour of Queen Mary’s white palfrey. In 1745 during the rebellion the Inn was used as the Jacobite headquarters

LADY STAIR'S CLOSE - takes its name from Lady Stair’s House which was built in 1622 by Sir William Gray of Pittendrum. The house was bought in 1719 by the widow of John Dalrymple, first Earl of Stair and it is after her that the house is named. The house was presented to the city by the Earl of Roseberry in 1907 and it is now the Writers Museum exhibiting relics of Robert Burns, Sir Walter Scott and Robert Louis Stevenson.

STEVENLAW'S CLOSE - a narrow street which leads from the High Street on Edinburgh’s Royal Mile via Tron Square and down to the Cowgate. The name of this close is taken from Steven Law, a supporter of Queen Mary during the Civil War of 1571. It is also believed that Prince Charles Edward Stewart worshipped at the Roman Catholic Chapel here.

PAISLEY CLOSE - situated on the north side of the Royal Mile between North Bridge and Jeffrey street. the location of the collapse of one of the old tenement buildings in November of 1861 in which 35 people were killed. When the debris was being cleared the voice of a young boy could be heard saying ‘heave awa’ chaps I’m no deid yet’. The voice belonged to young Joseph McIvor whose sculpture appears in the stonework immediately above the archway.

FLESHMARKET CLOSE - a steep street which leads from Edinburgh’s Royal Mile, over Cockburn Street and down onto Market Street at the back of Waverley train station. The street got its name from the meat market which operated right at the bottom of the close in the 18th century. Fleshmarket is the Scots term for ‘butcher’s market’

WORLD'S END CLOSE - sits on Edinburgh’s Royal Mile at the bottom of the High Street just before the start of the Canongate. The name is thought to relate to the city wall (or Flodden Wall) and the Netherbow Port – a large gatehouse which was built into the wall in the 16th century. The gatehouse marked the edge of the city and you had to pay to pass through it. Consequently, poor people never passed the wall and thought of this place as ‘the World’s End’.

SOUTH GRAY'S CLOSE - a narrow street which leads from the Royal Mile down to the Cowgate in Edinburgh’s historic Old Town. The close was named after John Gray Burgess but was previously occupied by the Grey Friars. It was also known as Mint Close because it housed Scotland's Royal Mint from 1574 till 1877

BARRIE'S CLOSE - is tucked away in the south east corner of Parliament Square next to St Giles Cathedral. It serves as a dog leg connecting Parliament Square with Old Fishmarket Close. Not much is known about the history of this hidden little gem or the origins of its name but it’s well worth a visit, especially at night when it’s quiet and lit up by its traditional style lanterns.

OLD TOLBOOTH WYND - a cobbled street leads from the Canongate on Edinburgh’s Royal Mile to Calton Road and was built in 1591. It takes it’s name from the ‘Auld Tolbuith’ of the Canongate. The tollbooth was the site of the council chambers, a police court and later, a prison. The building is now home to the Old Tolbooth Tavern and The Peoples’ Story museum.

TWEEDDALE COURT - gets its name from the Tweeddale Mansion which was occupied by Dame Margaret Kerr, daughter of the 1st Earl of Lothian. The mansion later became the head office of the British Linen Bank and in 1806 a bank porter named William Begbie was murdered here and robbed of £4,392. The murderer was never caught

SEMPLE'S CLOSE - located on Castle Hill at the top of the Royal Mile next to Edinburgh Castle. It is a dead-end close which doesn’t lead anywhere and was named after Grissel, Lady Semple who was the widow of Francis, 8th Lord of Semple. The remains of a mansion house can be found in the close bearing the date 1638. Lady Semple is thought to have lived in this mansion house until 1734.

OLD FISHMARKET CLOSE - leads from Edinburgh’s Royal Mile down to the Cowgate and gets its name from a fish market which occupied part of the close as early as 1592. It was described as a ‘stinking ravine’. The town hangman also lived here. The last of these was a John High who died in 1817. A fish hawker named Maggie Dickson once worked here. She became pregnant and tried to conceal the pregnancy resulting in the death of the baby. She was hanged but survived and lived out her days.

NORTH GRAY'S CLOSE - Close is a steep narrow street leading from the Royal Mile down to Jeffrey Street in Edinburgh’s historic Old Town. The remains of a 4 storey 16th century house can be seen here. There are some old stone doorways through which you can see the lower floor walls and what’s left of a stairway. There are plans proposed to restore this building. The name of this close has been unchanged since 1480 when it was named after Alexander Gray, a burgess of the city.

BAILIE FYFE'S CLOSE - is situated on the north side of the Royal Mile between North Bridge and Jeffrey street. This was the location of the collapse of one of the old tenement buildings in November of 1861 in which 35 people were killed or died of their injuries later in hospital. The ancient, dilapidated tenement fell in the courtyard between Bailie Fyfe’s Close and nearby Paisley Close and was thought to be more than 250 years old. The strong looking, stone exterior of the building be

DUNBAR'S CLOSE - is situated on the north side of the Canongate near the bottom of Edinburgh’s Royal Mile. It was named after the Edinburgh writer David Dunbar who owned the tenements on both sides of the close around 1773. The close is home to the most beautiful secret garden which is laid out in 17th century style and was donated to the city by the Mushroom Trust in 1978. Mrs Love owned an oyster cellar nearby and Robert Burns is believed to have frequented there around 1786.

BORTHWICK'S CLOSE - leads from the Lawnmarket on Edinburgh’s Royal Mile through to Tron Square and gets its name from Lord Borthwick who had a house built here in 1450. He owned a castle near Middleton. It is referred to as Lord Borthwick’s Close in town council minutes dating back to 1514 but later became known simply as Borthwick’s Close.

CRAIG'S CLOSE - dates back to 1742 and was named after John Craig, wright and burgess who owned a house here. The upper part of this close no longer exists as it was part of a demolition in 1932 to make way for an extension to the City Chambers. The lower part of Craig’s Close leads from Cockburn Street to Market Street at the back of Waverley Station and is believed to be the narrowest street in Edinburgh.

JACKSON'S CLOSE - leads from the High Street on Edinburgh’s Royal Mile down to Cockburn Street. It’s a steep curved close without stairs and is very atmospheric. It’s believed that the close was probably named after John Jackson who was a property owner here in the 18th century.

ANCHOR CLOSE - leads from Edinburgh’s Royal Mile down to Cockburn Street via a lot of stairs. This close dates back to 1521 and takes its name from the Anchor Tavern which was open here from around 1715. The Anchor Tavern was best known for the Crochallan Fencibles Club whose members included Robert Burns. They met under the guise of defending the city against impending attack whilst enjoying beer and merriment and feeling like heroes.

BAKEHOUSE CLOSE - is characterised by a deep stone archway which dates back to 1570 and leads from the Canongate on Edinburgh’s Royal Mile through to Holyrood Road. Its name comes from the property on the west side of the close which was a bakehouse once owned by the Incorporation of Bakers of the Canongate. In 1851 it is thought that as many as 230 people lived here. Imagine that!

0 items in your cart